In this notebook we will start to ease our way into using PEST++ for history-matching and uncertainty analysis. We will start by revisting the Freyberg model and the PEST control file. Both of these are pre-prepared and provided for you. We will calibrate the model by adjusting a single hydraulic property (hydraulic conductivity) and then look at typical summary statstics and plots that describe our degree of fit.

We will also start to gently introduce the use of pyEMU and programaticaly interfacing with PEST and PEST outputs.

We have provided some pre-cooked PEST dataset files, wraped around the modified Freyberg model. This is the same dataset introduced in the “freyberg pest setup” notebook.

The functions in the next cell import required dependencies and prepare a folder for you. This folder contains the model files and a preliminary PEST setup. Run the cells, then inspect the new folder named “freyberg_k” which has been created in your tutorial directory. (Just press shift+enter to run the cells).

Just a quick reminder of what the model looks like and what we are doing.

It is a one-layer model. A river runs north-south, represented with the SFR package (green cells in the figure). On the southern border there is a GHB (cyan cells). No-flow cells are shown in black. Pumping wells are shown with red cells.

Time-series of measured heads are available at the locations marked with black X’s. River flux is also measured at three locations (headwater, tailwater and gage; not displayed).

The simulation starts with a steady state stress period, followed by twelve transient stress periods. These represent the historic period, for which measured data are available.

A subsequent twelve transient stress periods representing a period in the future. Modelling is undertaken to assess selected forecasts during the simulated period. 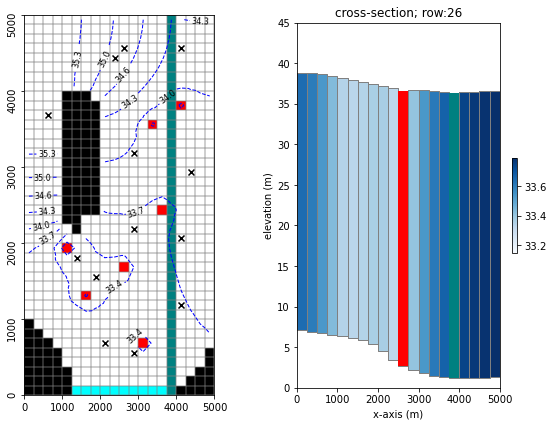 Open the new folder named freyberg_k and find the file named freyberg.pst. Open it in a text editor. You may recognize it from the previous tutorial.

In the tutorial folder there is a PDF file named “Annotated_PEST_control_file_SIR20105169.pdf”. Open it up and use it to guide you through reading the PEST control file and answering the following questions:

Here’s an annotated top of the PEST control file. Check the variables highlighted in yellow to answer the above questions:

Now, as we did in the previous tutorial, let’s double check these files to make sure the PEST dataset does not have any errors. Run TEMPCHEK, INSCHEK and PESTCHEK on the template, instruction and control files respectively.

Do it yourself for the other TPL files:

Do it yourself for the other INS files:

And of course, check the control file with PESTCHEK:

Because we call a program from within the Jupyter Notebook you have to look at the terminal window that you used to start the notebook to see the screen report of the run. So, when executing this next block look at your terminal window to see the run. It will say “Simulation complete…” when finished.

Note: And/or wait until the standard out reports a “0” below this next block (=when the run is finished) before going on.

PEST++ only ran the model one time - why?

Yeah, that’s right, the NOPTMAX=0 thing again. We had that set to zero because we want to check the plumbing before burning the silicon. Did everything run (i.e., did you see “Simulation Complete…” in your terminal window? Like before, you could change NOPTMAX to 20 in a text editor. But, pyemu can do it for you with the next block.

Note: see the “intro to pyemu” tutorial notebook for an overview of pyemu.

Check the freyberg.pst file again in a text editor. Verify that NOPTMAX has been changed to 20?

Just like before you have to look at the terminal window that you used to start the notebook to see the screen report of the run. So, when executing this next block look at your terminal window to see the run. It will say “Simulation complete…” when finished. It should take a couple of minutes.

Or wait until the standard out reports a “0” below this next block (=when the run is finished) before going on.

PEST writes lots of usefull information to the *.rec file. It also outputs a series of other useful files. What outputs are recorded depends on which version of PEST or PEST++ is being used. Here we will use PEST++GLM. The following section will demonstrate usefull information that can be found in some of the outputs. Throughout subsequent tutorials we will address others.

First let’s look at the measurement objective function (Phi), which is calculated using the sum of squared weighted residuals. First we’ll look at a table, then plots.

So thats usefull. If we make a plot (see next cell), it becomes evident that there are diminshing returns after a certain point (for this case!). 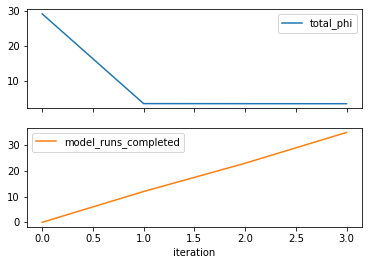 But hold on a second! We told PEST to try 20 parameter estimation upgrades but it stopped at 8! What gives?!?

PEST and PEST++ will quit the parameter estimation process if one of these 4 conditions is met:

Look at the FINAL OPTIMISATION RESULTS in the terminal where PEST++ ran (you can also find it near the bottom of the .rec file).

Which target group(s) matter? How was splitting the contributions to PHI accomplished in the PEST control file?

For this problem, recall our objective function is calculated using this equation:

where Phi is the “sum of squared weighted residuals” that we look to minimize, whi is the weight for the ith head observation; hm is the measured (observed) head target; hs is the simulated head; and n is the number of observations.

If we use only heads for calibration, then PHI only reflects the sum of squared weighted residuals for the observed-simulated head targets.

So! We have two types of observations (heads and flux) each in their respecive observation groups (hds and flux)…but only heads are contributing to the objective function. This is because all “flux” observations have been assigned zero weight (see the * observation data section). They are in the control file, but they aren’t doing anything for the time-being.

PEST++ stores obsevration residuals in a *.rei file. In the working folder you will find a file named freyberg.rei. Open it in a text editor. Here you will find a table with observation names, their measured and simulated values, the differneces between them (e.g. the residuals) and weights assigned in the PEST control file.

When instantiating a Pst class from an existing control file, pyemu will attemp to read a corresponding *.rei file. Data from the rei file is stored in the Pst.res attribute as a Pandas DataFrame. This makes it easy to access and postprocess.

We could plot these results up using common libraries. Or, use pyemus built in plotting methods (see next cell).

Not too shabby! Thanks PEST++.

These plots you’ll see a lot. The left plot is a “1:1” plot that has simulated on the x-axis and observed on the y-axis; a perfect fit would be all circles on the black diagonal line. The right plot has the residual (y-axis) compared to the observation magnitude (x-axis). The closer the circle is to the black line the better the fit. The mean residual is shown as a red line. 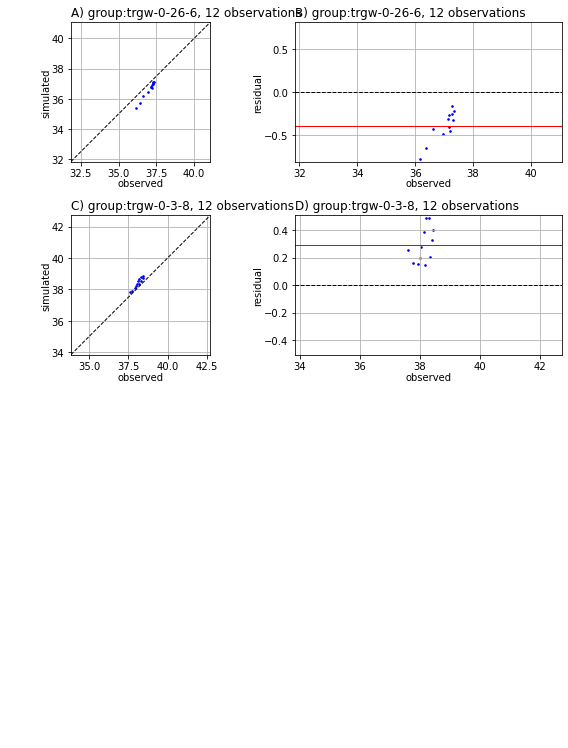 But we had a lot of other observations listed in the PEST control file. What do they look like?

How well did the model do at fitting river flux? Recall that only head observations have non-negative weights, so PEST was only interested in getting a good fit with heads, ignoring all other observations. 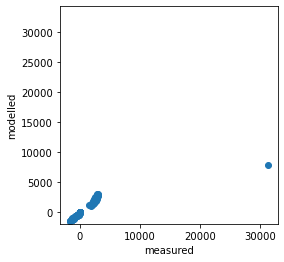 PEST++GLM conveniently records parameter and forecast uncertainty summaries in CSV files (we will get to what this means and how it is done in another tutorial). Parameter uncertainty is recorded in the file named freyberg.par.usum.csv.

Recall that because we log transformed the hk parameters the uncertainty results are reported as logarithms in the dataframe above. What you’ll see in the MODFLOW input file is the non-log transformed hk value (e.g. 10^0.69897 = 5.0 for the prior mean).

The dotted gray line represents the “prior” information as expressed by the parameter bounds in the PEST control file. (In this case, the differences between parameter bounds are taken to represent the probability distribution range.) The shaded area is the uncertainty after the calibration.

Wow! Amazing, almost no posterior uncertainty…ermm…yeah, no. That ain’t right. 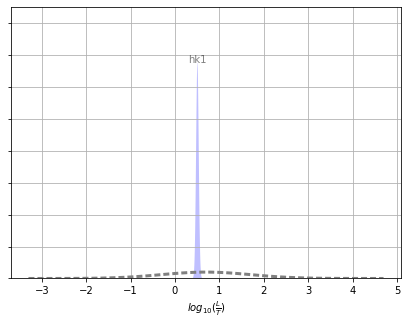 Now let’s look at changes in model forecast uncertainty, first as a table then as a plot. These are observations now instead of parameters like above. PEST++GLM has recorded these in the file named freyberg.pred.usum.csv.

As we can see in the plot below, prediction uncertainty is reduced for all forecasts. Some by quite a lot! Our calibration must have been amazing (#sarcasm) 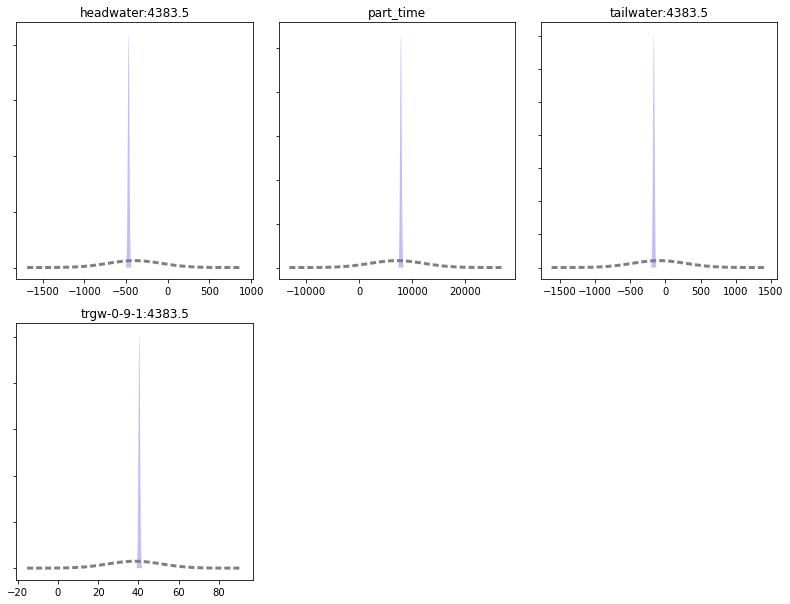 By comparing prior to posterior standatd deviations we can check how well calibration reduced forecast uncertainties (see bar plot in the next cell; larger value is better). 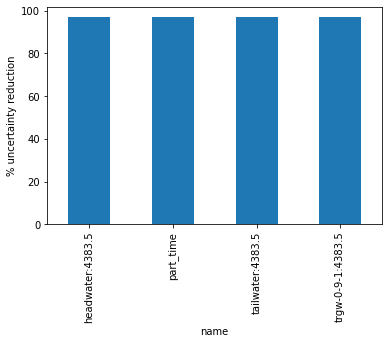 Wow! Calibration really helped huh? So we can call it a day and bill the client? Awesome, thanks very much and have a nice day!

Just because we can, let’s look again at forecast uncertainty with the “truth”. In the next cell we plot the forecast probability distributions again, but this time we have included the “true” outcome as well (the vertical black dashed line). Recal that here we know the “truth” because we (the authors) created reality; in the real-world we do not have this luxury. 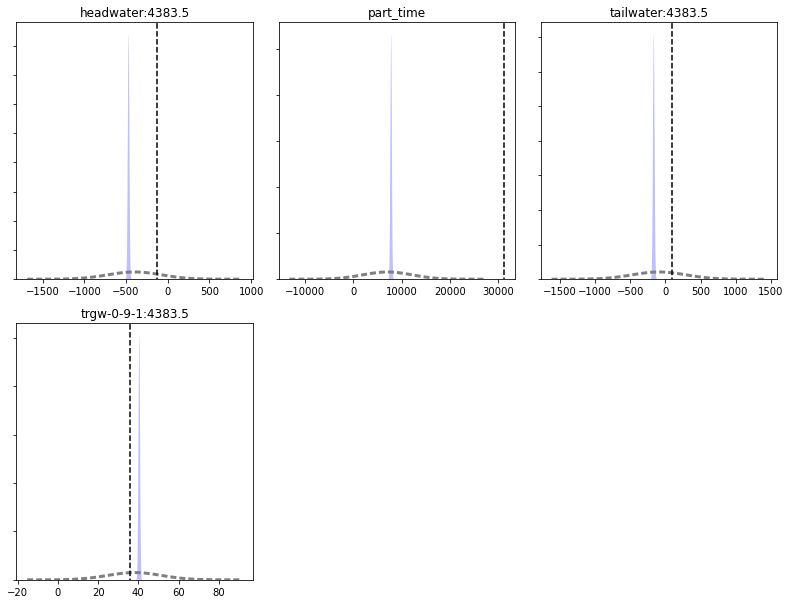 Dear oh dear….none of the forecasts are bracketed by the posterior distribution! This means that

In some cases the prior (the dashed grey line) encompasses the “truth” but the posterior (the blue shaded area) does not. Therefore calibration actualy made our forecasts less reliable. Why is that? How can improving a model’s ability to represent the past make it worse at representing the future?

Find out in the next episode!